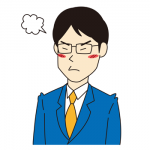 Once you become a Rentai-Hoshou-Nin for your friend’s house rental, you are likely to  bear responsibility for the following points.

You may think it will not become a large amount, but, as a matter of fact, it could become very big.