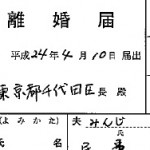 The first step is “divorce by agreement”. In this case, a married couple will discuss about divorce themselves. If they reach an agreement, they can submit the divorce notification (“Rikon Todoke” in Japanese) to the city office, and then the divorce will be established. The couple can freely determine about the distribution of property, but producing a consensus document of the distribution is recommended.

2）Divorce by mediation (“Cho-tei” in Japanese)

The second step is “divorce by mediation”. When the married couple fails to reach an agreement by discussion, either party can request mediation for divorce  (“Rikon Cho-tei“) to the Family Court. At the mediation, one judge and two arbitrators advise on the couple’s divorce. If the couple could reach an agreement in a divorce settlement, divorce is established. The Family Court will make a written record of divorce mediation for you (so that you can bring it to the city office).

3）Divorce by decision of the family court (“Shinpan” in Japanese)

4) Divorce by trial (“Saiban” in Japanese)

The third step is “divorce by trial”. In case a married couple does not consent to divorce by mediation, the divorce problem is brought to trial. In the trial, both party will stake their claim, and submit evidences to the Family Court. Finally, the judge will decide whether the divorce is admitted or not. Mediation must be conducted before the trial.